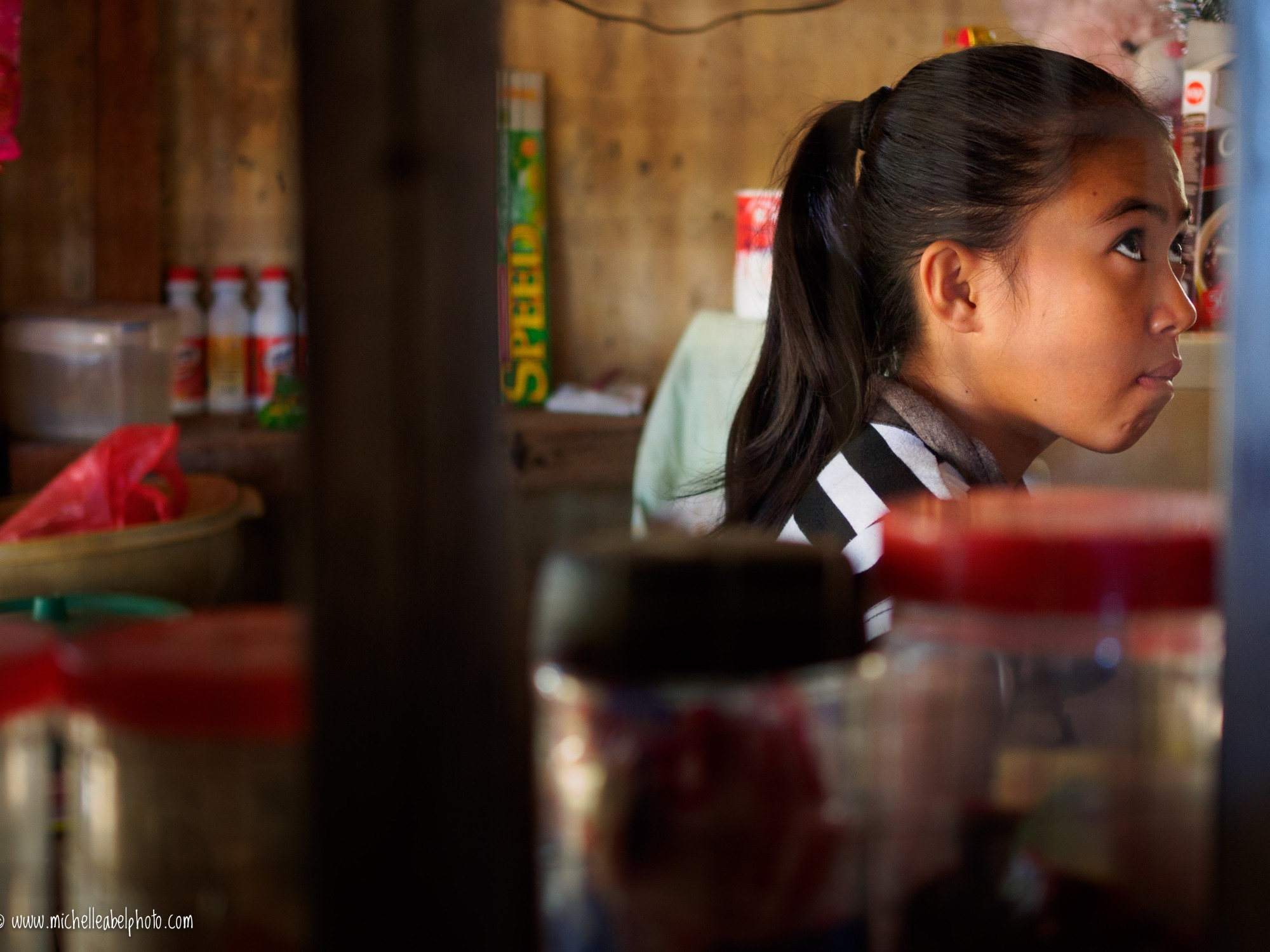 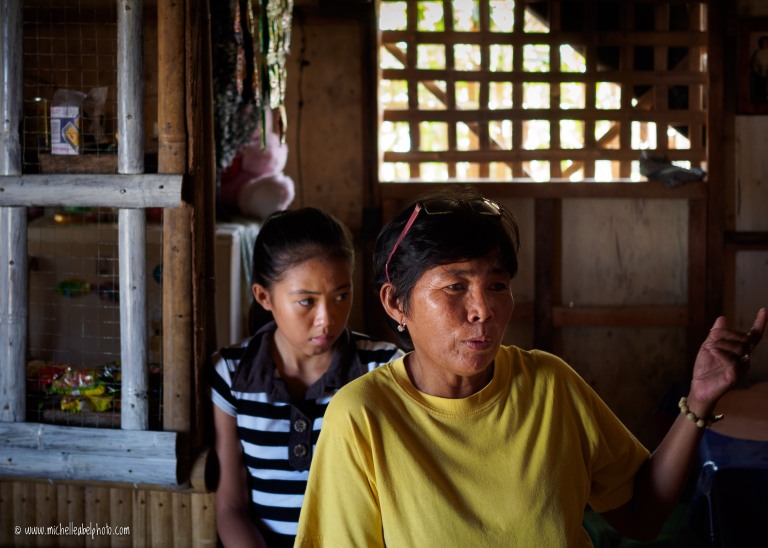 Here is her homemade kitchen. I love the small vase of flowers on the sink, and the abandoned watermelon rind on the bench (just like my children would do). I have a concrete bench top in my new kitchen too. Mine has been polished and sealed, but every oil drop on it has to be wiped up quickly before it stains. This one looks far more easy to maintain! 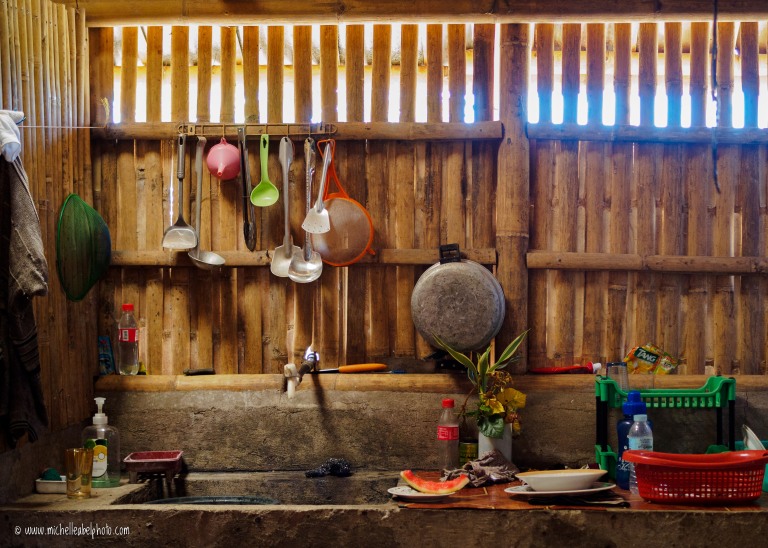 This mat was on the floor in the main part of the house, in the doorway to the kitchen. I loved the coordination of the red mat with the red curtain in the doorway. I wondered if there was a story behind the valentine mat, but I didn’t ask because we were explaining why some of the roofing rafters were not attached securely enough to the building. 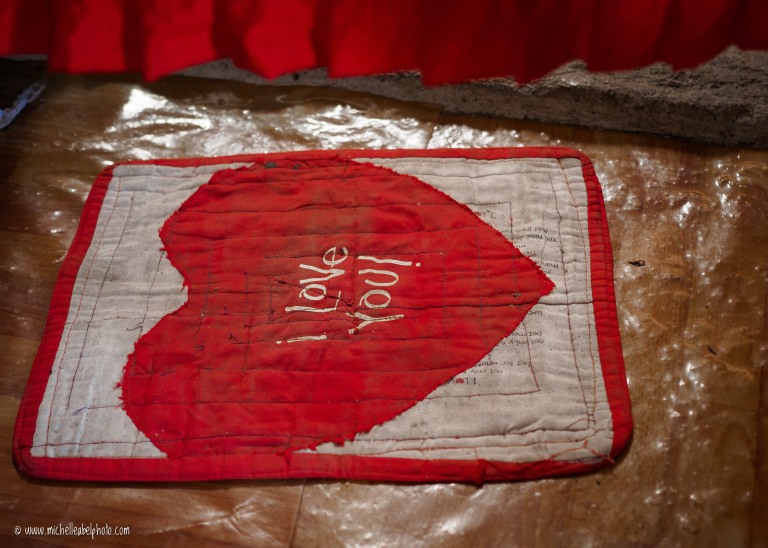 Part of the main room has been divided off into a small home shop. There is a tiny window where shoppers can peer inside and select things to buy. When I visited Julia’s youngest daughter was doing shop duty. Behind the little shop was a television in prime place on a shrine of trinkets and photos. It was on, and a local soap opera was playing. The daughter wasn’t interested in me – the telly was much more interesting! 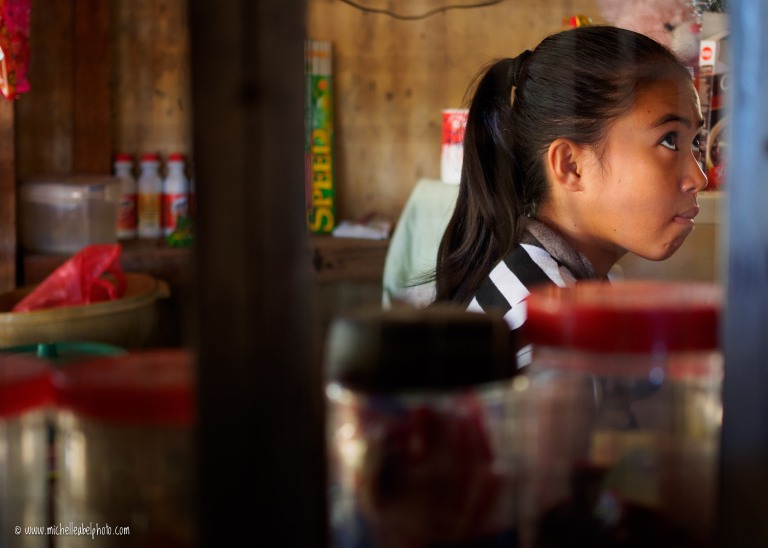 This is Rebecca. She is photographed with her grandchildren. They also lost their home in Typhoon Haiyan. Her son is in the photos behind her. He graduated as a marine, but hasn’t been able to secure permanent work yet. So she and her husband are caring for the grandchildren. 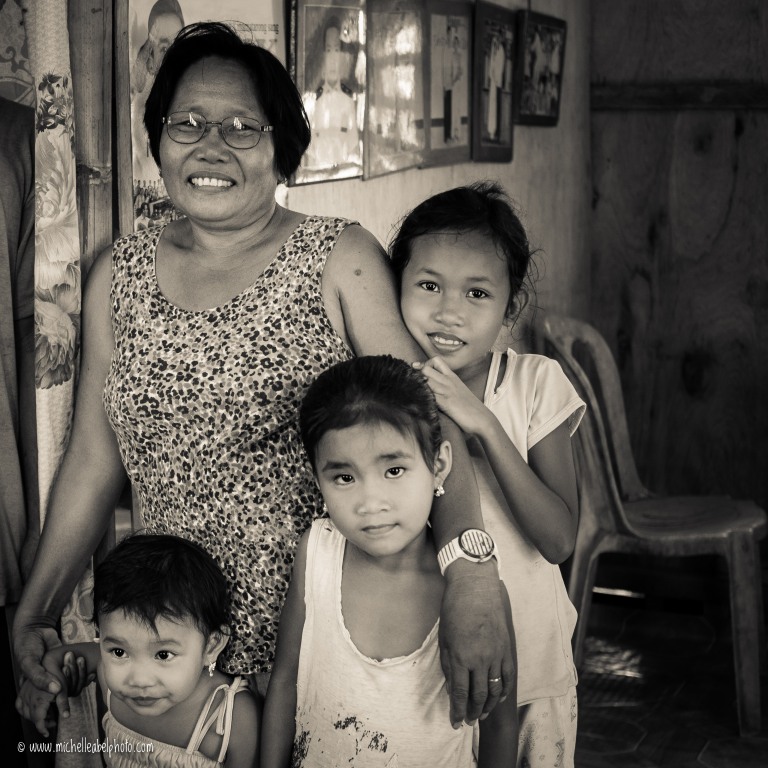 Her home is carefully and colorfully decorated. Every surface is covered with wallpaper or prints. Everything was spotless. Along one wall was a massive collection of teddy bears, surrounding a small television. Photos of the family were placed carefully on the walls. Rebecca and her husband have extended the original shelter provided to them. They have added a kitchen at the back, a sitting area at the front, and even put in a toilet (not plumbed to a septic though, just draining in a buried pipe to an open sewer). Sanitation in these communities is an urgent challenge, because we all want the convenience of an inside toilet. 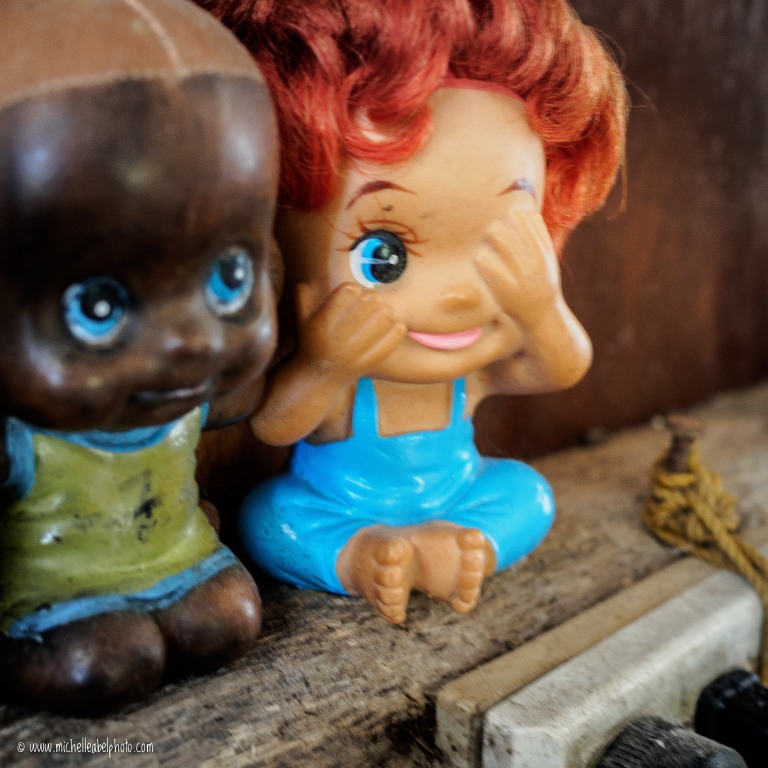 The challenge that the NGO I am working with faces is how to balance the reality of building a typhoon-safe shelter – which ideally follows a set foundation, framing and bracing method, with doors and windows able to be fully sealed from the extreme winds – with the desire by families to have a comfortable home with breezes flowing through the windows and extra spaces to sit, eat and sleep. So the best we can do is ensure that the families understand how to attach their extensions to the basic shelters following the building principles promoted by the disaster response shelter committee in the Philippines. 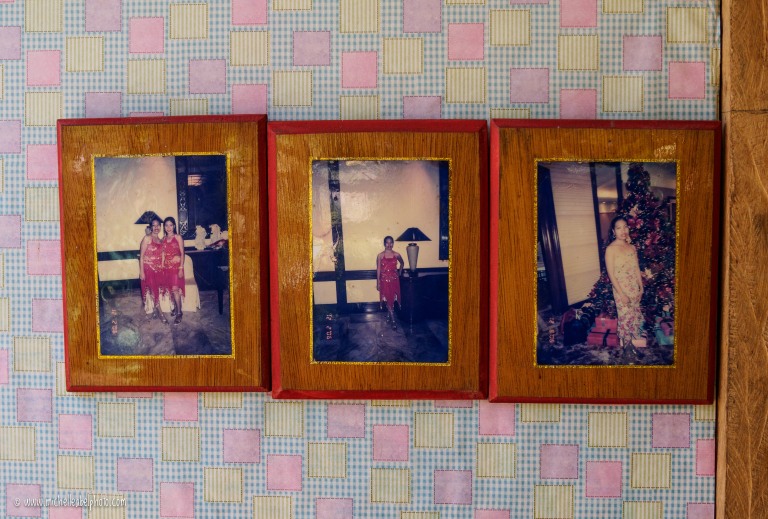 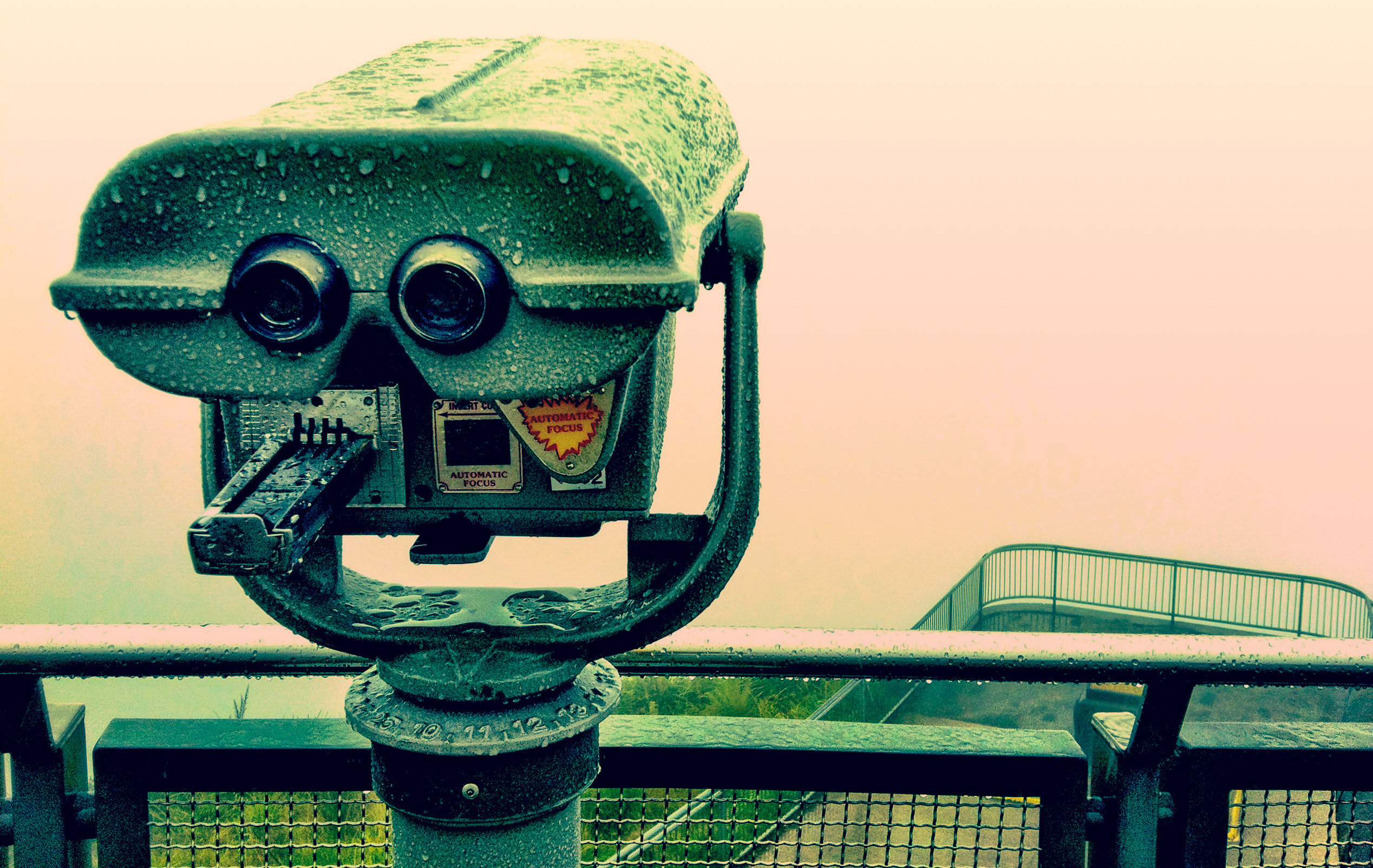